His Last Bow by Arthur Conan Doyle is one of 56 short stories about Sherlock Holmes and tells a spy plot instead of a murder mystery. 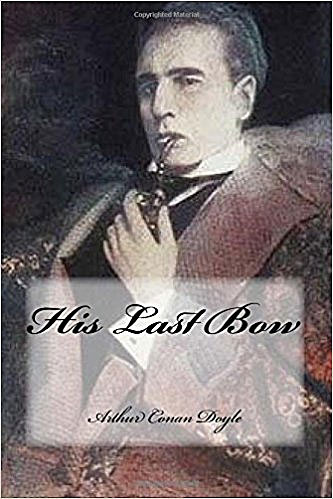 Published in September 1917,  this spy story was first published in Strand Magazine amongst six other tales and was collected in an anthology titled His Last Bow, also called Reminiscences of Mr. Sherlock Holmes.

The narration of His Last Bow by Arthur Conan Doyle, this time, is performed in the third person by Dr. Watson, the faithful all time sidekick that plays the Main Character here.

Due to its portrayal of British and German spies, its publication during the First World War and its patriotic themes, the story has been interpreted as a propaganda tool intended to boost morale for British readers.

Arthur Ignatius Conan Doyle is a Scotish writer responsible for the creation of the Sherlock Holmes character and adventures. (read mini-bio)

In this story, we are on the eve of the First World War, and Von Bork, a German agent, is getting ready to leave England with his vast collection of intelligence, gathered over a four-year period.

His wife and household have already left Harwich for Flushing in the Netherlands, leaving only him and his elderly housekeeper. Von Bork’s diplomat friend, Baron von Herling, is impressed by his collection of vital British military

Von Bork’s diplomat friend, Baron von Herling, is impressed by his collection of vital British military secrets and tells Von Bork that he will be received in Berlin as a hero.

Von Bork indicates that he is waiting for one last transaction with his Irish-American informant, Altamont, who will arrive shortly with a rich treasure: naval signals.

Von Herling leaves. Von Bork then hears another car arriving. It is Altamont. By this time, the old housekeeper has turned her light off and retired. Altamont shows him a package.

Altamont’s mistrust of Von Bork is evident in his refusal to hand over the package before he gets his check. Von Bork, for his part, wants to examine the document before handing over the check.

Altamont hands him the package and uses a chloroform-soaked rag to put him to sleep. It turned out that Altamont was none other than Sherlock Holmes, and the chauffeur who brought him, Dr. Watson, who had both been counter spying against the German intelligence.

Holmes had been on this case for two years when he identified the security leak through which British secrets were reaching the Germans.

The housekeeper was part of the plot too. The light that she switched off was the signal to Holmes and Watson that the coast was clear.

They drive Von Bork and all the evidence to Scotland Yard.

In reference to the impending World War I, Holmes concludes,

His Last Bow by Arthur Conan Doyle is the last chronological installment of the series, bur another collection, set before the story, would be published later.

Another excellent plot, I recommend this book to the permanent library of any reader that appreciates a well-written mystery story, mainly featuring Mr. Sherlock Holmes.

Recommended for Adults, Teenagers, and Kids.

Please leave a comment about this His Last Bow by Arthur Conan Doyle book review.