The Three Musketeers book review: Wrongful characters in an era full of intrigue and deceit as two great nations dispute power over Europe. 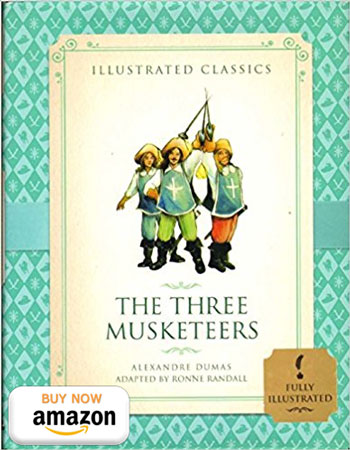 What’s not to love on all of this, right? For those of you who think this novel is only about “one for all in all for one,” prepare to be surprised!

Since it appeared as a pamphlet in 1844, the story of The Three Musketeers has gone through over thousands of adaptations. Along the years, the adventures of Athos, Porthos, Aramis, and d’Artagnan have penetrated our collective imaginary, making this cloak and dagger romance gain the status of a real cultural myth.

Alexandre Dumas, (1802-1870) was a French novelist and playwright, author of the classic of literature, “The Three Musketeers”. His stories have been translated in several countries and produced several films. 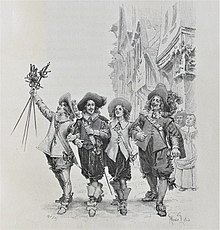 The story takes place in seventeenth-century France, at the time of the reign of Louis XIII, where in the village of Meung the young D’Artagnan is leaving for Paris, where he wishes to fulfill his dream of becoming a King’s Musketeer, just as his father before him. From the D’Artagnan father, the young Gascon receives three presents (The Horse, the Sword and the Letter of Recommendation to the Commander of the Musketeers) and leaves for his adventure. From then on, the most diverse plots will come to meet the young man, where we will meet various characters such as the noble Musketeers Athos,

His father gives him three presents, a horse, a sword and a letter of recommendation to the Commander of the Musketeers. The young man leaves for his adventure and, from then on, the most diverse of plots will involve the young man.

We get to meet a variety of characters such as the noble Musketeers Athos, Porthos, and Aramis, the mysterious and fatal Milady, as well as historical figures such as Louis XIII himself, his wife, Anne of Austria and The Cardinal of Richelieu.

I always liked the history behind the story of the Musketeers, but I never paid much attention to their differences.

The first thing that makes Dumas win your heart, and draws all the attention to the book, is character construction. Be it D ‘Artagnan, as a heroic vision to the molds of Don Quixote, Athos and his good and melancholic air, Porthos and his vanity that makes Dorian Gray seem humble or even Aramis and his dilemma between serving the Crown or the Church, Dumas is irreprehensible when constructing his archetypes. You care about each and every one of them, as well as you hate the guts of all the evil ones.

All the refinement of the characters comes from the fact they heroes and villains are not perfect in their primary roles and are quite humanized by that. The Musketeers are drunkards, extravagant, selfish, gambling addicts and do not care about being supported by their lovers (something apparently common in Europe at the time).

Athos has a dark past that he does not want to reveal. D’Artagnan is in love with a married woman, but this “pure love” does not prevent him from getting involved with Milady, or deceiving her maid. Aramis has a very liberal view of life for a religious man. Porthos, as I have already commented, is so vain that can be compared to the protagonist of Oscar Wilde’s novel.

But none of their vices or defects prevents them from performing their function well.

But no character, in my view, was as prominent as Milady. In the book, we have several women with characteristics that make them strong and powerful, without having to be objectified, or even wielding a sword and starting the duel, but Milady can be considered a milestone in this respect. Armed with her influence and beauty, she is a unique character because she is astute and insightful as few and capable of the most diverse manipulations to fulfill her goals and save herself from problems. She is an antagonist who steals the scene whenever she appears.

Another nice point is the historical period. The reign of Louis XIII was characterized by wars against the Huguenots (French Protestants) from the reign of the old king when D’Artagnan father participated.

Even Spain and England did not have a good relationship with France, and the king was known to be very dependent on his prime minister. The Cardinal, as the main antagonist of the plot, was, at the same time as a “necessary evil” figure, and a pillar to France, with his influence and men. Even with all this historical weight, Alexandre Dumas was free to use these personalities at his pleasure, without being help up in his creativity.

D’Artagnan rallies his new friends to foil Cardinal Richelieu’s plot to depose the Louis XIII and crown himself king of France.

Set in a time of various battles, with charismatic and well-crafted characters and intriguing plots, this book is a novel full of adventure and emotion. It keeps us addicted page after page until the end.

Please leave a comment about this ‘The Three Musketeers book review‘.

The Three Musketeers
Alexandre Dumas
Fiction Adventure Historic Fiction Intrigue
Several
1844
All sorts
around 400, depending on edition and format