Simple dramatic archetypes are functional roles that can be distributed among characters to complete a set of fictional tasks in a plot.

Once again, this is not always planned by the writer, but it is something that has been observed by scholars along the uncountable number of good plots available ever since men started telling stories .

Good stories tend to have this set of archetypes as close to plenitude as possible and using it to plan a story helps a lot its achievement. 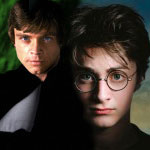 Action Feature
Pursues the objective of the story. The familiar protagonist is the driver of the narrative: the one who forces the action.

Decision Feature
Evaluates the situation and moves the other characters to examine the necessity of achieving the goal. 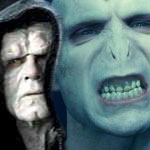 Action Feature
The Antagonist physically attempts to prevent or avoid the success of the goal by the Protagonist.

Decision Feature
The Antagonist forces the other characters to reconsider the effort to achieve the target. 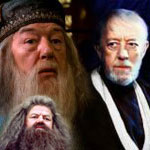 Action Feature
The Guardian is a helper who assists the struggles in achieving the story goal.

Decision Feature
It expresses conscience in the mind, based upon the Author’s sense of morality. 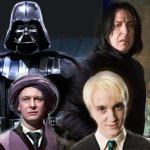 Action Feature
The Contagonist hinders the attempts to achieve the story goal.

Decision Feature
It represents the temptation to take the wrong course or approach.

Action Feature
This character is very controlled or calm in its actions.

Decision Feature
It makes its decisions based on logic, never allowing emotion get in the way of a rational course.

Action Feature
This player is frantic or out of control in its actions.

Decision Feature
It reacts with its feelings with disregard for a practical analysis of a situation.

Action Feature
It supports, playing a kind of cheering section.

Decision Feature
It is almost naive to the extent of its faith in the goal, in the Protagonist, in success, etc.

The Skeptic opposes everything.

Decision Feature
It disbelieves almost anything, doubting courses of action, sincerity, truth; Whatever.

Having divided them in two, we can see that each of the Archetypal Characters has an Attitude or Decision feature and an approach or Action feature.

When we arrange both features under each of the eight Archetypes, we come up with a chart that helps understand what they represent.
In Dramatica, we refer to these 16 characteristics as the Motivation Elements because they describe what drives the Archetypal Characters. 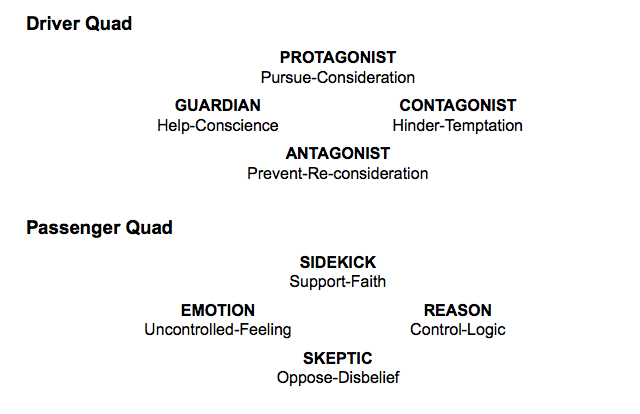 It is important to note that those 16 functions don’t necessarily need to be assigned attached to their original archetypes, to one character for each pair. A lot of times complex characters are created by combinations of them to one or more characters and even groups of characters.

Star Wars has a very flat structure distribution with every archetype assigned to one character, while in Harry Potter a lot of the features are spread among many characters or groups of characters.

We are trying to use that model in some of our book reviews like the ones about J. K. Rowling’s Harry Potter series. The link will take you to her mini-bio where you can find a list of the books.

The narrative theories presented in this article are heavily based and influenced by the Dramatica Theory created by Melanie Ann Phillips and Chris Huntley.

If you want to have some clues about storylines, don’t miss my article about Dramatic Structure Diagrams.