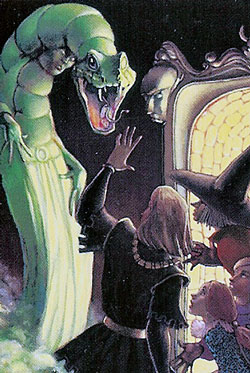 This is the 4th book in Lewis’s Chronicles of Narnia. Continue to follow the adventures in the land where anything can happen! Check it out!

If you find that justice and truth are necessary, that taking responsibility is an important issue in your life, and you are fond of large cats, this book is for you.

The novel is a fantasy tale that portrays religion, witchcraft, mystic realm quests, and ends up with revenge against bullies. Even, if you don’t find the concepts above important, I bet there’s something for you here.

Narrative models are not something that all writers use to structure their stories. As I have stated before, these models were not created, but, yet, were observed and organized by scholars with the objective of understanding an author's mind. They can be, and are, very useful as tools for creating stories, tho.

With that in mind, one should always be aware that we are not suggesting that this or that author used the models on their work. Rather, we are simply trying to fit the story into the model as a means of understanding the writer's mind.

I have experienced difficulty in that with C. S. Lewis before. His mind seems to work differently, and yet, brilliantly.

Elements of those models are present in his stories, but not in a conventional way; His plots are more complex.

If we think about that and the success of his books, we will conclude that children's stories, don't necessarily need to be simple and trapped in models.

Let's see what we can come up with:

In a very peculiar and unpleasant school called Experiment House, Jill Pole, is the object of the bullies.

Eustace Scrubb asks for Aslan’s help when trying to escape with her from bullies at their school.

They reach a gate that leads them into Aslan’s Country, but away from each other.

He reaches Jill and says that she must help Eustace find Prince Rilian, and supplies Jill with four signs that will guide them in their mission. Then he also blows Jill into Narnia, and she arrives moments after Eustace.

They see the old King Caspian, Prince Rilians’ father, preparing to sail east to search for Aslan. The Lord Regent, Trumpkin, gives Eustace and Jill room in Cair Paravel. Over there, they meet Glimfeatherm and some owls that help them, explaining that Rilian disappeared while looking for a green serpent that killed his mother and now he is under a spell from the Green Witch.

Jill and Eustace travel towards the North of Narnia with Puddleglum, a Marsh-wiggle.

Those giants give Jill, Eustace, and Puddleglum a warm welcome but in fact, the Titans are planning to eat them at the Autumn Feast.
They escape and go to a nearby cave and slide down a slope into the Underland, under the ruins of the old giant city.

Once there, deep underground, they are found by gnomes, whose leader force the trio to follow them.
They cross the Sunless Sea into the city ruled by the Lady of the Green Kirtle, who is not there. She is no other than the Green Witch. They also meet her protegé, the black knight.

Her young protégé treats them pleasantly but seems to be disturbed. The black knight suffers from nightly psychotic episodes and needs to be tied to a silver chair to protect everyone around him.

While he is having one of those mental fits, he asks them to release him in the name of Aslan.

That was the fourth and last sign that Aslan had given to Jill for helping their quest, so they release the young man that reveals himself to be Prince Rilian.

The Green Witch returns and tries to bewitch them all,

Puddleglum breaks her spell, and she transforms herself into a green serpent. Prince Rilian recognizes the reptile as the same one that killed his mother. He kills the snake and leads the travelers in their escape from the Underworld.

The gnomes are also free from the witch’s spell and show them a route upward out of the Underworld. Prince Rilian returns to Cair Paravel where his old father meets him just before dying.

Returning the kids to their world, Caspian goes (rejuvenated) with them, and helps to frighten the school bullies away. The bullies also saw Aslan and run back to the school in terror. Aslan and Caspian return to Aslan’s Country and Eustace and Jill change clothes and go back to their school.

2 thoughts on “The Silver Chair by C. S. Lewis”