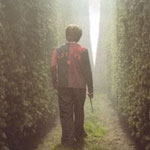 ? Will he survive the tournament? Is Voldemort coming back? Check it out! 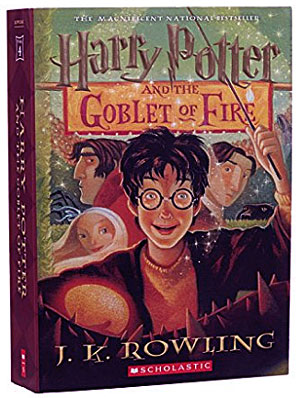 As Harry Potter and his readers come of age, so the complexity of the writing develops to new stages with a darker story and, more subplots and intricate characters.

From the saga birds-eye view, this is the moment when things get dramatically really serious and Harry Poter finally realizes he is in a point of no return situation.

Up until now, Harry Potter was just a brave kid, and, now, with Voldemort’s return, there is no escape for him, he growth process is largely escalating.

Wisely, J. K. Rowling seems to understand (and write accordingly to) the fact that her readers are growing up and need more literary juice in the books.

The teenager's fourth year is marked by the Triwizard Tournament, in which school champions compete in a sequence of increasingly challenging matches.

Strangely and against traditional rules, Harry Potter is chosen as a second contender to represent Hogwarts, under the shadow of a possible Voldemort come-back.

Will he be able to face those challenges?

The creature in the chair kills Frank Bryce with a flash of green light. Harry Potter's scar sears and wakes him up.

Worried with his hurting scar, Harry sends a letter to Sirius, asking about it.

Harry joins the Weasleys to the World Quidditch Cup at the end of summer. They touch a Portkey to travel there.

Fudge has some relationship with the traditional Malfoy family, who is anti-Muggle.

An attack at the Championship site occurs. Harry loses his wand. Someone uses it to conjure Voldemort's Dark Mark. That is not okay for the Ministry of Magic's image.

Harry is suspicious of a foul play plan by Voldemort.

The Triwizard Tournament, a dispute against other two schools, will be taking place at Hogwarts this year.

The Goblet of Fire will choose three champions to represent them in magical quests.

A series of unexpected events involving a new Professor of Defense against the Dark Arts, Harry Potter, Sirius Black, international students, deceiving-news, and the tournament turmoils life at Hogwarts.

The new Defense Against the Dark Arts professor, Alastor Moody, protects Harry from being attacked from behind by Malfoy.

Moody teaches about three curses: the Imperious, the Cruciatus, and Avada Kedavra – the Killing Curse - that has only once been blocked - by Harry Potter, who outlived his parents.

Harry panics that Sirius is going to come out of hiding just because his scar is hurting.

The other two schools delegations arrive at Hogwarts.

The Goblet of Fire chooses three champions to compete and, strangely, Harry as a fourth contender. He has to participate, whether he wants to or not.

Ron and others think that Harry somehow cheated the rules to get into the tournament. Harry feels betrayed. Hermione believes him.

Harry's life in Hogwarts gets miserable: He gets into a fight with Malfoy and their spells ricochet towards their friends.

Hagrid walks Madame Maxine and Harry, under his invisible cloak, to the edge of the Forbidden Forest where they see four "fully grown" dragons.

Sirius is anxious because he thinks that the tournament could be an opportunity to attack Harry, faking an accident.

Harry does a fantastic job against his Dragon. The clue for the second task resides with their dragon eggs.

The kids all struggle with pairing for the ball.

Cedric Diggory suggests that Harry should think over his clue while sitting with his golden egg in a particular bathtub.

Near the second task, Harry feels guilty about not figuring out the egg clue.

Underwater, in the bathtub, he hears a message from the egg telling him to seek where voices sound for what he'll sorely miss.

Harry figures out that, for the task in Hogwarts lake, he needs to learn how to breathe underwater.

Harry unexpectedly turns out fine in the second mission at the lake and is now tied with Cedric Diggory for first place.

Professor Moody reminds Harry, "constant vigilance". Harry dreams of Voldemort casting the Cruciatus Curse on Wormtail after plotting with him. He tells Dumbledore about it. Fudge doesn't want to admit that there's any evidence that Voldemort is trying to rise again.

Suspicions about Voldemort come back, and the increasing perils of the tournament leave an uneasy sense of darkness on Hogwarts grounds

Professor Dumbledore thinks that Voldemort is attempting to rise back to power and that there is some elemental connection between Harry and the Dark wizard.

Harry learns about the past of many wizards, using the memory pensive.

Professor Dumbledore states that both Professor Snape and Ludo Bagman remained on the right path since they moved away from Voldemort.

Harry must train since the third task could be a trap. Ron and Hermione are spending all of their time helping Harry learn spells for the magical maze. The tasks objective is to reach the Goblet first. Harry and Cedric are suddenly pulled "onward in a howl-of-wind and swirling color."

Harry Potter faces a life-threatening challenge that can change everybody's life in the Wizarding World.

The Triwizard Cup was a Portkey to a cemetery. Cedric is killed. Voldemort resurrects.

This whole tournament has been leading Harry to the Riddle grave to perform a spell that would bring Voldemort back to life.

Harry faces Voldemort and his parents (along with allies) spirits help him escape with Cedric's body.

The usual return to the modified Ordinary World where the feeling of a new beginning leaves us waiting for the next book.

Moody was, in fact, Barty Crouch, Jr. in disguise, who had been executing Voldemort's plan to lure Harry into the trap.

Barty Jr is silenced forever by a Dementor. Fudge vehemently refuses (or does not want) to believe that Voldemort has risen again

He tells the students that Lord Voldemort murdered Cedric, even though the Ministry of Magic is denying it.

Harry gives the 1000 Galeon tournament prize to the twins as an investment to start their joke shop.

Harry decides to wait for what's coming ahead.

Protagonist= Voldemort
Sidekick = Barty Jr., Wormtail and Death Eaters (to Voldemort); Dobby and Hermione, Ron in part of the story (to Harry)

6 thoughts on “Harry Potter and the Goblet of Fire”