Arthur Conan Doyle is one of the most famous writers in English, most noted for creating the fictional detective Sherlock Holmes. Read on.

The author, who was born on 05/22/1859 in Edinburgh, Scotland, was a medical student from 1876 to 1881 at the University of Edinburgh. Before finishing medical school, Doyle began writing short stories and had a few works published.

After an uneasy practice partnership with a classmate, Arthur Conan Doyle went to Portsmouth in June of 1982 with less than £10. 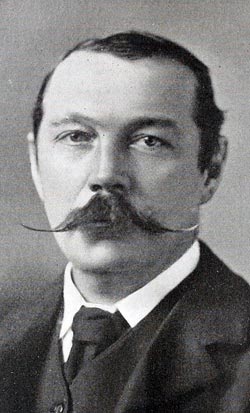 His initial uncertain success led to writing stories again. He composed his first novels and a portfolio of short stories.  It took some time until they were published.

A series of Holmes stories followed while Conan Doyle struggled with publishers.

A heart attack took Doyle’s life at the age of 71 in 1930. “You are wonderful”, were his last words to a grieving wife.

A controversial discussion about his spiritualist beliefs led to a debate about where to bury him. So he was first buried on 07/11/1930 in Windlesham rose garden.

Later he was re-interred together with his wife in New Forest, Hampshire. His epitaph points him as a right and honorable man of letters and principles.

His home in the south of London became a hotel and restaurant from 1924 until 2004. Moreover, it ended up in a judicial dispute for redevelopment that was canceled. The house now is a school for special kids.

Statues of both Doyle and Holmes were placed in Crowborough and Edinburgh, respectively.

A Study in Scarlet

The Adventure of the Abbey Grange

The Adventure of the Six Napoleons

The Hound of the Baskervilles

The Problem of Thor Bridge

Search for Conan Doyle on Amazon