Tolkien is one of the most important writers in literature. His high-fantasy genre style has influenced many artists of all media worldwide. 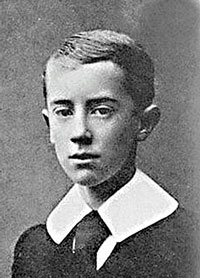 Born on 3 January 1892, John Ronald Reuel Tolkien was an English writer, poet, philologist, and professor distinguished for the classic high fantasy works, The Hobbit, The Lord of the Rings, and The Silmarillion.

A close friend of C. S. Lewis, J. R. R. Tolkien was a members of the informal literary discussion group they both attended, distinguished as the Inklings.

After Tolkien’s death, his son Christopher published a series of works based on his extensive notes and unknown compositions, including The Silmarillion. These, along with The Hobbit and The Lord of the Rings form a connected string of fictional histories, tales, poems, invented languages, and essays about a fantasy world called Arda, and its Middle-Earth.

Between 1951 and 1955, Tolkien created the term legendarium to characterize the larger part of these writings.

His great achievement has popularly identified him as the “father” of modern fantasy literature, more precisely, of high fantasy.

On his father’s side, Tolkien’s ancestors were middle-class artisans who produced and sold watches, clocks and pianos in Birmingham and London. The Tolkiens had emigrated from Germany in the 18th century and adapted very quickly to English life. 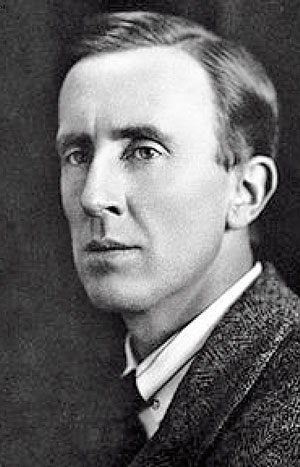 His father Arthur Reuel Tolkien, an English bank manager, and his wife, Mabel, left England when he was promoted to work in South Africa for the British Bank.

Tolkien and younger brother, Hilary Arthur Reuel, were both born in africa. In 1995, the mother and both boys went ahead to England for a lengthy family visit. Before joining them, his father, however, died in South Africa of rheumatic fever.

Without a supporting income, Mabel took him to live with her parents in Birmingham. Soon after, in 1896, they moved to a Worcestershire village.

The surroundings of his home would later inspire scenes and aspects in his books.

Tolkien liked to learn and draw landscapes and trees, but he preferred languages, and Mabel, very early, trained him in the rudiments of Latin.

Tolkien could read and write fluently very early in life and around five he was already reading books and stating his opinions about many children’s and juvenile classics.

A few years after converting to Catholicism, Mabel Tolkien, in 1904, at age 34, died of type 1 diabetes. Her death made young Tolkien reflect about spirituality and faith.

The boys’ guard was assigned to her dear friend Father Francis who taught them about charity and forgiveness while living in the surroundings of Edgbaston, another one of his scenic influences.

While in his early teens, and studying Latin and Anglo-Saxon he became interested and ended up creating a new structured language called Naffarin.

During the first years before World War I, Tolkien blossomed a strong dedication to writing poetry, studying the Classics and finally graduating in English Language and Literature, in 1915 with first-class honors in his final examinations.

At the same period, he fell in love with Edith Mary Bratt but was forbidden from continuing to see her until his 21st birthday since she was a Protestant.

After a few years, on the evening of his adult age, Tolkien wrote to Edith, and they got engaged after settling some left behind issues.

He was highly well-educated, Catholic, and, jobless, had no bright prospects. Going against all the odds and wills, she converted to Catholicism, and they married on 22 March 1916. 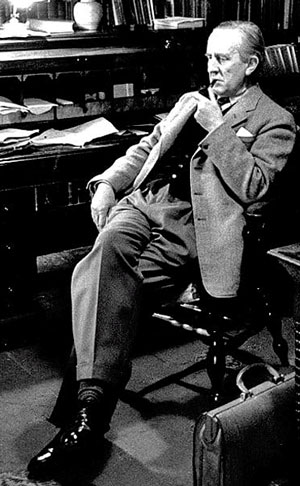 On 2 June 1916, Tolkien received a telegram summoning him to Folkestone for transportation to France. The First World War was knocking on his door.
Tolkien’s time in combat was a terrible stress for both Edith and him. To evade the British Army’s postal censorship, Tolkien developed a code of dots with which she could track him.

While commanding an outpost in Yorkshire, they were able to live together for a brief period with the war still going on. This incident inspired the account of the meeting of Beren and Lúthien in Silmarillion.

After the war, Tolkien finally returned home with a huge bag of experiences, wounds, and losses that influenced his later work, on his ill and tired shoulders.

His first civilian job after World War I was at the Oxford English Dictionary.

In 1920, he took up a job as Reader in the English Language and became the youngest professor at the University of Leeds.

In the 1920s, Tolkien translated Beowulf. His son published it in 2014. This Anglo-Saxon powerful piece of dramatic poetry influenced Middle-earth profoundly.

He returned to Oxford as a Teacher of Anglo-Saxon, with a fellowship at Pembroke College In 1925,

Tolkien developed The Hobbit and the first two books of The Lord of the Rings during this time.

In the Second World War, Tolkien trained as a codebreaker, but, later was informed that his services would not be required.

During his academic services for several educational institutions, Tolkien was highly prized and esteemed until his retirement in 1959.

Tolkien also responsible for the translation the Book of Jonah for the Jerusalem Bible, published in 1966.
Family

The Tolkien couple had four children to which the author was very devoted. Each year he would send them, richer and richer, illustrated letters from Father Christmas when they were young.

During his retirement, from 1959 to 1973, Tolkien received a lot of public attention and literary fame. His work was so profitable that he regretted not retiring earlier.

Tolkien was appointed by Queen Elizabeth II a Commander of the Order of the British Empire in 1972, the same year that Oxford University gave him an honorary title of Doctor in Letters. 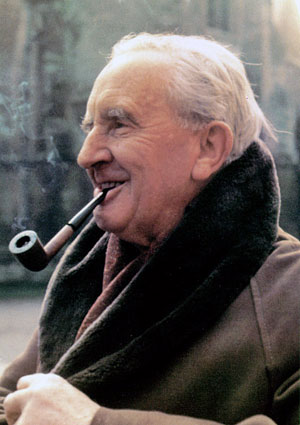 The engravings on their tombstones read:

Beowulf: The Monsters and the Critics

An academic literary essay. His 1936 seminal lecture, later published as an article, revolutionized the treatment of the Anglo-Saxon epic Beowulf by literary critics.
Children’s books and other short works

In addition to his mythological fiction, Tolkien enjoyed inventing fantasy stories to entertain his children. He wrote annual Christmas letters from Father Christmas for them, building up a series of short stories.

By sheer accident, a book called The Hobbit, which he had written for his children, came to the attention of George Allen & Unwin publishers. A year later, the book was published, attracted adult readers as well as children, and became popular enough to demand a sequence.

The Lord of the Rings

This sequel to The Hobbit became his most famous work and is formed by three volumes:

The Fellowship of The Ring

The Return of the King

A brief “Sketch of the Mythology”, that includes the tales of Beren and Lúthien of Túrin and The Fall of Númenor; the Quenta Silmarillion, an epic story that Tolkien started three times but never published.

His son Christopher, his literary executor, published The Silmarillion in 1977.
In 1980 Christopher Tolkien published a collection of somewhat fragmentary material, under the title, Unfinished Tales of Númenor and Middle-earth. 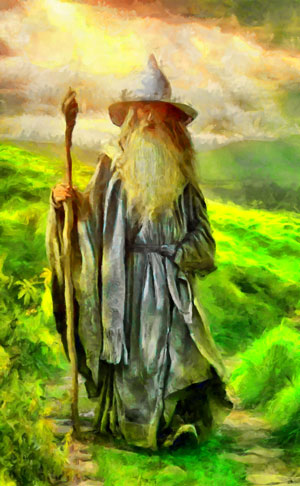 A children’s storybook that is quite unknown.
The Children of Húrin

Published in 2007, The Children of Húrin relates the story of Túrin Turambar and his sister Nienor.
The Legend of Sigurd and Gudrún

The Fall of Arthur

The Fall of Arthur is a long account poem inspired by high-medieval Arthurian fiction, set during the Post-Roman Migration Period.

Beowulf: A Translation and Commentary

Published on 22 May 2014, this 1920-1926 work is a modern English prose translation of the ancient medieval heroic poem Beowulf.

The Story of Kullervo

The Story of Kullervo is a retelling of a 19th-century Finnish poem. It was written in 1915 while Tolkien was studying at Oxford and published in 2010.

The Tale of Beren and Lúthien is the earliest and most often revised in Tolkien’s legendarium. Expected as a standalone book in 2017.

The materials related to The Lord of the Rings, The Hobbit and Farmer Giles of Ham belong to Marquette University in Milwaukee, Wisconsin.

His estate donated the papers containing Silmarillion mythology and his academic work to Oxford University.

You may be interested in our prolific authors’ page.