Harry Potter and the Chamber of Secrets
book 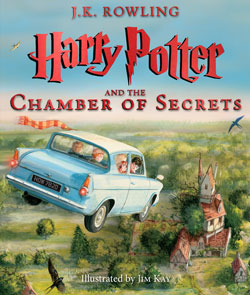 A review of the 2nd novel in the series written by J. K. Rowling. Harry Potter’s second year at Hogwarts School of Witchcraft and Wizardry. Check it out!

In this novel, we follow Harry Potter during his second year at school.  A series of attacks leaving people petrified is happening.

Along with those attacks, messages, by the victims bodies,  on the walls of Hogwarts School of Witchcraft and Wizardry leave dire warnings about the opening of a  “Chamber of Secrets”. The threats also announce an “heir of Slytherin” that will kill everyone that is not a pure-blood wizard.

Along all year, Harry and his friends Ron Weasley and Hermione Granger embark on an investigation to find out what’s that all about.

Rowling had some difficult facing the possible comparison between the first and the second book. That uncertainty caused her to be over zealous before releasing the novel after some months of revision delay.

The book was a success despite some analysis saying it was too dark or not very suitable for younger children.

The usual religious debates around Harry Potter started to become a habit, unnecessary, in my opinion.

People have a tendency to forget that fiction is supposed to entertain and, eventually,  discuss basic philosophical issues; Not impose doctrines.

Moral issues like self-sacrifice and self-character development based on choices are discussed in the book, as well as personal identity.

A discussion about racism is also a topic raised, as well as a sense against incompetent self-favoring public service institutions.

A connection to book 6, Harry Potter and the Half-Blood Prince, can be noticed if you already know the saga up to that point.

I high gross film based on the novel was released in 2002 and has already become a classic.

J. K. Rowling is a British author famous for the Harry Potter series of books and films.

After been framed and put into trouble with the Dursley’s by an elf called Dobby, Harry Potter gets grounded, risking his return to Hogwarts. That was, in fact, Dobby’s objective since he believes Harry will be in danger if he goes back to school.

Using a flying car, Ron and his twin brothers rescue Harry Potter to spend the rest of the holidays with them before school starts.

The Weasley family and their guest go to Diagon Alley and meet Hermione Granger. There they find Draco Malfoy, Harry’s rival at school, and his father, Lucius.

They also attend a book event by Gilderoy Lockhart, a swindler who has been appointed the new teacher of Defense Against the Dark Arts.

For some mysterious reason, Ron and Harry can’t manage to reach the train to Hogwarts and are forced to take a sidetrack by stealing Ron’s father’s flying car.

After crashing into a sentient willow tree, the boys get grounded.

While in detention, Harry hears a sinister voice in his mind that leads him to find the first petrified victim, the cat called Mrs. Norris. On the wall a warning:

“The chamber has been opened. Enemies of the heir, beware.”

As gossips about the Chamber fly around Harry and his friends start investigating. During a History of Magic class, they discover that The Chamber of Secrets, created by Salazar Slytherin, houses a terrible monster.

Slytherin was one of the schools founders that parted ways with the other three co-founders Gryffindor, Hufflepuff, and Ravenclaw over a racial matter about the wizarding purity of blood.

Harry breaks his arm during Quidditch. In the hospital, Dobby tells him that he had sealed the gate at the train station and also charmed the ball that hit him. His objective was to protect Harry from further danger.

The first school student victim arrives at the nursery.

This time, it is first-year Colin Creevey and the school enters panic mode.

Dueling classes are set up for the students. Lockhart and Severus Snape are the instructors. During the first instruction class, an unusual event reveals that Harry can speak snake-language.

Students around the school suspect Harry is the Heir of Slytherin and another attack happens increasing everyone’s mistrust.

Harry, Ron, and Hermione become shaky about Draco, a declared prejudiced fellow against Muggle-born wizards, being behind the attacks.

To spy on Draco, Hermione makes Polyjuice potion, which allows them to become Draco’s lackeys, Crabbe and Goyle.

The meeting with Draco reveals that the Chamber had been opened 50 years before.

Myrtle Warren, an existentially mopey ghost, provides a new clue, a diary that once belonged to Tom Riddle, a former student that knew too well about the Chamber and a student’s deaths at the same period, 50 years before, supposedly caused by Rubeus Hagrid.

Hermione is attacked, and the school is locked down. Dumbledore and Hagrid have to stay away until further notice.

Following instructions left by Hagrid, Harry and Ron trail the spiders into the Forbidden Forest.

There they find, Aragog, a monster-spider blamed for the attacks fifty years before.

Aragog explains that the real menace is a most fearsome monster even to spiders.

A note found with Hermione informs that it’s a basilisk, a giant serpent. That explains why Harry, and nobody else, could understand it.

The basilisk can kill just with a stare, but all victims were lucky enough to have had some optic protection when they faced it and only got petrified.

Harry figures out the basilisks victim from the past was Myrtle.

Ginny disappears, probably taken by the monster into the Chamber of Secrets.

They find its entrance is in one of the school’s bathrooms and jump into it forcing Lockhart to come along.

After a confusion with the fraud professor, Harry, alone, has to face his final challenge to free Ginny from the ghostly memory of Tom Riddle, a character full of secrets… like the Chamber…

Inside the cavern, Harry, once again, meets the memory-ghost of Tom Riddle, who, in fact, is Voldemort. He wants to steal Ginny’s life essence and return from the dead.

Harry defeats the Basilisk and kills Voldemort for the second time.

As with all conclusion acts, we return to a modified Ordinary World; A world that can still be quite extraordinary to us, but is common to Harry Potter and his friends:

Hermione and all other attacked victims are well, and Hagrid is released from prison.

6 thoughts on “Harry Potter and the Chamber of Secrets”