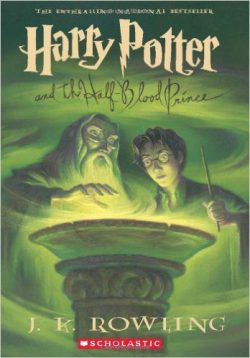 This book is the 6th in J. K. Rowlings’ famous saga about the boy wizard that became a teenager with a most challenging quest. Check it out!

The conflict facing Voldemort is not turning out right. Dumbledore is out from Hogwarts for long ranges of time, and the Order of the Phoenix has already sustained losses.

And still, as with all hostilities, life keeps going. Sixth-years start learning to Apparate. Adolescents flirt, argue, and lose their hearts.

Harry receives some extraordinary help in Potions from a mysterious book with notes. And with Dumbledore’s leadership, he investigates the life story of Voldemort and finds his own weakness.

The Author and Average Rating

J. K. Rowling is the famous author of the Harry Potter saga and other titles. If you want to know more about her, read this mini-bio about the writer.

Harry Potter and the Half Blood-Prince
The Review

This story depicts very important plot points in the structure of the general saga, and, maybe, for this reason, some of its structure points may seem weak to the novel when you analyze it isolated from the series, even though, some of its plot points are not so difficult to find.

I believe this phenomenon is intentional since we are now getting to the end of the saga and the novels’ plots are being heavily merged with the saga’s plot.

Harry Potter and the Half Blood-Prince
Dramatic Structure

In the beginning of this story, the world is in an uproar. Voldemort’s army is increasing its power, and tragedies are becoming standard.

The Muggle world is also a mess, and fear overflows. The Muggle Prime Minister meets with the Ministry of Magic. The news is not good. It seems that a war is going on, and not even Hogwarts is completely safe.

Dumbledore uses Harry’s fame and Professor Slughorn’s vanity to convince the former professor to return to Hogwarts. The headmaster wants Harry to get close to Slughorn to extract vital information about Voldemort’ past.

After seeing Draco Malfoy in suspicious action in Diagon Alley, Harry believes that his foe now is a Death Eater. Nevertheless, few believe his theory.

Teenagers are raging their hormones at Hogwarts, testing Harry, Ron, Hermione and their friends into facing adult feelings and conflicts.

Homework load is intense and tensions arise with Snape on Harry’s take whenever possible.

Professor Horace Slughorn is the new Potions teacher, and he finds Harry to be a Potions superstar due to a mysterious notebook that Harry has found.

The sixth year is also the year in which Harry and his friends begin to learn how to Apparate.

Many tragedies and obscure circumstances strike members of the Hogwarts community. It seems that an outsider is conducting dark magic for the Dark Lord. Harry wants to figure out what is going on.

Dumbledore takes a greater role in Harry’s education with private lessons that involve traveling into the memories of those who once knew Voldemort in the past. They gather information on how Tom Riddle became Voldemort.

The most valuable memory, unfortunately, is disguised inside Slughorn’s mind, and it is now Harry’s task to convince the Potions professor to expose his memory.

That task proves to be tough since Slughorn tries very hard to avoid that.

IWhen Harry is all out of ideas, with the help of a luck potion, he eventually ends up convincing Slughorn to expose his hidden memories.

The memory shows the moment in which Voldemort first learned about Horcruxes, powerful, outlawed Dark Magic that provides the ability to gain immortality.

Dumbledore supposes) that Voldemort killed seven people to conceal parts of his soul inside seven different objects, the Horcruxes.

Using the memories that he has already collected pertaining to Voldemort, Dumbledore can make good guesses about where Voldemort’s Horcruxes might be. The only way to kill Voldemort is to destroy every single Horcrux, which, Harry realizes, will be his ultimate goal and mission in life.

After traveling to retrieve the first Horcrux, a task that proves to be incredibly difficult, dangerous, and scary, Harry and Dumbledore arrive back at Hogwarts only to find that the castle has been invaded by Death Eaters. The Dark Mark (the sign of Voldemort) floats like a cloud over the castle tower. As Dumbledore and Harry fly to the tower over which the Dark Mark lingers, they discover that the Dark Mark is a trap intended to lure Dumbledore to that very tower. Before he is cornered by Death Eaters, Dumbledore is able to use his magic to hide Harry and to make him temporarily immobile and mute, so that the Death Eaters will not discover him.

Draco Malfoy arrives first at the scene, his wand pointed at Dumbledore, intent on killing him. Draco is nervous and shaky – it doesn’t look like he’ll be able to go through with killing the great wizard. But he’s under orders from the Dark Lord, who has specifically stated that no one but Draco is allowed to kill Dumbledore that night. Soon Draco is flanked by his fellow Death Eaters who taunt Dumbledore and urge Draco to pull the trigger. But Draco can’t do it. Then Snape arrives. Knowing that powerful Aurors bent on protecting Dumbledore have arrived, Snape kills Dumbledore, sending him tumbling off the edge of the tower.

Harry is overwhelmed with grief. He watches Dumbledore die, and he can’t do a thing to save him or help him on account of the protective magic Dumbledore had cast upon him. Harry runs downstairs to get help and finds his friends, teachers, and Aurors fighting the Death Eaters in a violent battle. Blood is everyone, but no one is hurt too badly. The Death Eaters leave, and Harry is unable to stop Snape or to use his magic on him.

A crowd has gathered around Dumbledore’s body, and Fawkes, Dumbledore’s phoenix, sings a grief-stricken song. The faculty assembles to decide what should be done next and to consider closing Hogwarts for good.

Dumbledore wished to be buried on school grounds. On the day of his funeral, people from all over the world come to pay their respects. Everyone, from the Minister of Magic to Hagrid, from the mermaids in the lake to the centaurs in the forest show up to honor the greatest wizard in the world. Deep in his heart, Harry knows what he must do next. He must hunt Voldemort down and destroy each one of his Horcruxes. Ron and Hermione swear to follow and support Harry no matter what. Harry is left with a heavy heart, but with the knowledge that he has good friends.

Harry Potter and the Half Blood-Prince
Archetype Distribution

It is important to note that Voldemort is still pursuing his goals in the saga as a protagonist.

It is important to note that Harry Potter is still reacting as a saga-antagonist in avoiding Voldemort.

Skeptic = Skeptic a bit weak in this book and divided smoothly between many characters like Ron, Hermione, Lupin, etc.

REad this article about the Harry Potter Story Structure of the Saga.

Please leave a comment with your opinion about Harry Potter and the Half Blood-Prince.