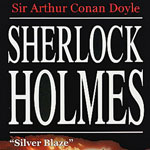 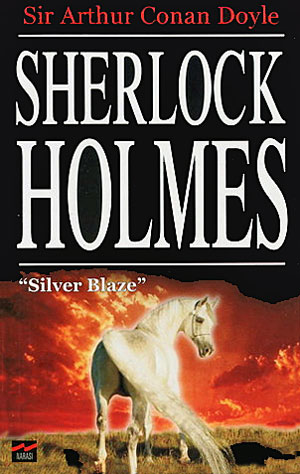 Ranked one of his favorite short stories, Silver Blaze by Arthur Conan Doyle is one of the author’s most compelling plots. Check it out!

Sherlock Holmes, the brilliant and famous sleuth who can unscrew the most intricate layered coils of “naturally” simple crimes, and explain the complexities of impossible mysteries.

The writer ranked this short story number 13 out of his 19 most appreciated. “Silver Blaze” belongs in series of 56 Sherlock Holmes short works.

It is also one out of 12 in the collection called “The Memoirs of Sherlock Holmes”.

Additionally, one of the most popular Sherlock Holmes short stories, Silver Blaze is distinguished by its atmospheric Dartmoor setting and late-Victorian sporting milieu.

In that peculiar scenario, the disappearance of a racehorse and a murder lead to singular and unexpected situations.

Sir Arthus Conan Doyle is one of the most well-known British writers. He is the famous creator of Sherlock Holmes. (read mini-bio)

This work is one of the best short Sherlock Holmes stories, in my opinion.

The plot is simple, yet superb:

I crime has already occurred.

Holmes and Watson visit Dartmoor to examine a crime: the disappearance of the great racehorse, Silver Blaze, and the killing of its trainer.

Fitzroy Simpson is a London bookmaker who, among other things, bets on horses and was interested about the cup in which Silver Blaze will run.

However, Sherlock Holmes believes that some facts don't fit in as the inspector thinks. For instance, it appears unlikely that the alleged perpetrator would bring the horse out onto the field merely to hurt or kill it. So stealing seems unlikely too.

What good would such a prestigious purebred horse be to him?

Why didn't an exhaustive search of the surroundings turned up the horse?

What has Simpson done with him?

The sleuth also reasons why the policemen could not find the horse, despite having seen it. Holmes guarantees Silver Blaze's security and turns to other points of the matter.

John Straker, the late horse-trainer, was killed by a hit to the head with a club like walking stick. They also found the suspect's cravat in Straker's hand, and the latter's coat was found draped over a bush.

A peculiarly delicate-looking knife is found at the scene. Dr. Watson identifies it as a delicate medical surgery knife, from Weiss & Co., London. That would be unsuitable as a murder weapon.

It also appears that Straker stabbed himself in the hip with this knife.

Somebody doped the stable boy, that was on guard that night, with opium powder. He was sound asleep all night long.

Straker's pockets carried two items: a tallow candle and a modiste bill for a dress made to one William Derbyshire.

Moreover, a curious incident with the dog and a problem with the stable sheep (three of his animals have recently become suddenly lame) also call for attention.

Holmes's abilities disclose the mystery and lay bare what villainies there are to be exposed. He visits the milliner's workshop in London and determines, using Straker's picture, in which Straker posed as Derbyshire.

This fact confirms his motive: he had a lover with expensive habits and tried to change the race's result to gain a large sum of cash.

The curried sheep was a sign, also; only such a spicy meal could have disguised the taste of opium, and it was impossible for Simpson to fix a highly tasty meal that night for his purposes. Therefore, somebody in the house must have conceived the idea. Namely, Straker himself.

The "odd episode with the dog"  was easily defined: the dog didn't make any noise because the intruder was someone that the dog knew well. It was Straker who removed Silver Blaze from his stall and led him out onto the moor." Straker's goal was to use the tiny knife to injury the horse's legs just a bit.

Simpson's cravat (later dropped) should act as a sling to grasp the horse's leg while cutting it.

Spoiling the plan, the horse, feeling something wrong, panicked and kicked the trainer in the head. Straker's death was an accident. He had used the poor sheep for practice.

Colonel Ross's main interest, of course, is the safety of his horse. Holmes decides not to say where his horse has been until after the Cup, which Silver Blaze wins.

Initially, Ross does not recognize his horse because its distinctive markings have painted off.

The horse had been found and looked after by one of the Colonel's neighbors.

Sherlock Holmes explains the details of the case step-by-step to the satisfaction of Inspector Gregory, Watson, and the Colonel.

Holmes sees that Gregory is a remarkably good policeman and just lacks the quality of imagination—an ability to second-guess other options in a given situation and act on intuition.

If you read this review, feel free to leave a comment!