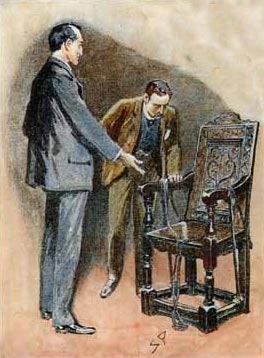 The Adventure of the Abbey Grange is from a set of 56 Sherlock Holmes short stories. Arthur Conan Doyle wrote them for a cycle called  The Return of Sherlock.

The murder of Sir Eustace Brackenstall rushes Sherlock Holmes and Watson to the Abbey Grange one morning.

Lady Brackenstall had been beaten during the preceding night’s incident. She had a swelling over an eye and two red spots on her arm.

Violence, abuse, and a drinking problem made the one-year marriage an unhappy burden to Lady Brackenstall.

Lady Brackenstall had been having difficulties adapting to England. Her new home was different from Australia, that she had left 18 months before.

Apparently, at 11 o’clock, she was checking out the house before bedtime. Entering through the window, was an unknown elderly man followed by 2 mates. She passed out after being knocked out in the face.

Coming back to her senses she noticed being tied up with a torn-down and gagged bell-rope, to a wooden chair. 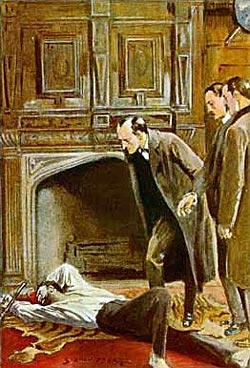 Coming into the room, Sir Eustace rushed at the intruders with a cudgel. One of them then,  killed her husband using a poker. She fainted again for a couple of minutes just to wake up and see the intruders partying with wine and then running away with some silvery.

Still lying at the murder scene, the body is stabbed heavily with the poker that bent into a curve.

Unsavory and even sadistic information about Sir Eustace comes up.

After examining the crime scene, and the whole setup, nothing seems to fit.

Holmes starts a thorough investigation and comes up with unexpected and astonishing conclusions that lead to controversial interpretations and actions.

This book is an excellent plot about the balance between right and wrong. From beginning to end, it will capture any reader who appreciates a well-written mystery story.

After some digging, Holmes discovers, in England,  a Jack Crocker,  the first officer on the ship that Mary used to move from Australia.

He also finds out that the family-gang was not responsible for the murder.

Holmes tells Jack that he will help him if he tells the truth.

Willing to help Mary, Jack confesses that after falling in love, he came to see if he could help her and she fell in love with too.

He came to see her that night.

Sir Eustace came in, rushed at Jack and is killed in self-defense. She came up with the burglary-story to keep Jack out of jail.

Jack wants to protect Mary from being tried as an accomplice.

Holmes and Watson pronounce Jack not guilty because the crime was justifiable.

Jack must disappear for a while and return to marry her.

Let’s see what people from Goodreads had to say: 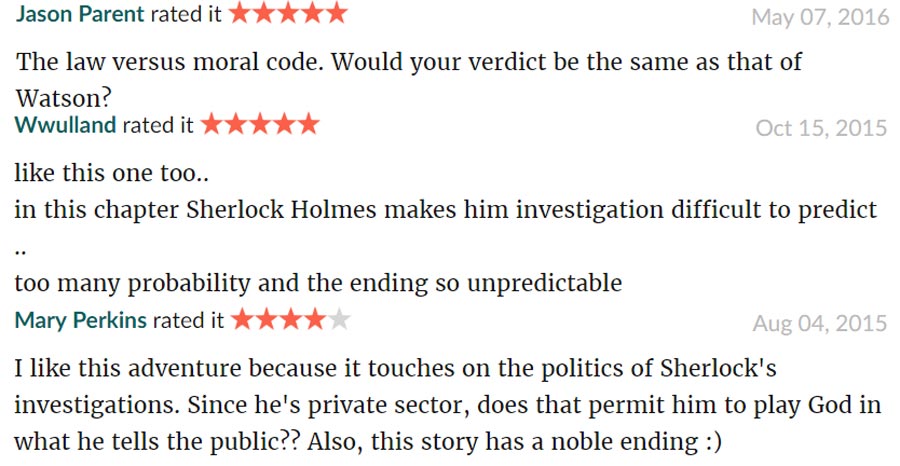 2 thoughts on “The Adventure of the Abbey Grange”