Are you wondering if C. S. Lewis’ The Horse and His Boy

book should be your next option?, Take my advice and READ IT! It’s definitely worth it.

We have a mini-biography of the author, C. S. Lewis, if you wish to learn a bit about him. 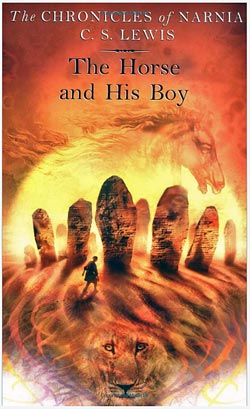 A boy named Shasta is raised by a Calormene fisherman after the fisherman found him as a baby in a boat at the sea.

Shasta overhears the fisherman negotiating to sell him to a Calormene feudal noble. He learns that the fisherman is not his real father, and he runs to the stable where finds a horse.

The noble’s horse, Bree, is a talking horse and speaks to him and suggests that they should escape and ride north to Narnia. In their way, to Narnia, they find two travelers, Aravis, a young Calormene aristocrat, and her talking horse, Hwin. She is fleeing from an arranged marriage to the Tisroc’s grand vizier. The four must travel through Tashbaan, the capital city of Calormen, to continue their journey to Narnia.

She is fleeing from an arranged marriage to the Tisroc’s grand vizier. The four must travel through Tashbaan, the capital city of Calormen, to continue their journey to Narnia.

At Tashbaan they meet a procession of visiting Narnian royalty, who mistake Shasta for Corin, a prince of Archenland, who disappeared from their group earlier that day. Shasta is too scared to protest and goes with the Narnians. He overhears their plan to escape from Tashbaan and Calormene to prevent Rabadash from forcing Queen Susan to marry him. The real Prince Corin reappears, and Shasta manages to escape.

He overhears their plan to escape from Tashbaan and Calormene to prevent Rabadash from forcing Queen Susan to marry him. The real Prince Corin reappears, and Shasta is able to escape.

While Shasta is with the Narnians, Aravis was spotted by her friend Lasaraleen and Aravis asks her to keep silent about her identity and help her escape from the city.

When trying to escape, she has to refuge in a room where she overhears the Tisroc and Rabadash discussing the Narnians’ escape and Calormene plot to conquer Narnia.When she manages to flee the city, she rejoins Shasta and the Horses.

The four of them cross the desert trying to escape from a pursuing Lion (later they find out that the lion was, actually, Aslan) and outrun Rabadash’s army.

Shasta reaches King Lune and warns him of the approaching of the Calormenes. The Archenland army defends the city against the Calormenes until Narnia’s army arrives to help.

King Lune of Archenland recognizes Shasta as Cor, the long-lost elder twin of Prince Corin and therefore heir to the throne. Aravis and Cor live in Archenland and marry years later. Their son becomes the most famous king of Archenland.

The archetypes of this plot are complex and spread over different characters. This is what I've come up with so far:

If you have any suggestions about the archetypes and plot structure, please leave a comment.

The Horse and His Boy has biblical allusions. The story draws parallels with the story of Moses: both are sent away from their families at birth, both were found floating in the water, and both turn away from the country they are raised in, and both end up being the savior of their real countries.

This is an absolute must-read fantasy book. When you read it, it's almost impossible to wait until the entire “Chronicles of Narnia” saga is over.

4 thoughts on “The Horse and His Boy book”