Child of the Ghosts by Jonathan Moeller book review: For fans of Marion Zimmer Bradley’s “Sword and Sorceress”, a fight against an ancient evil. 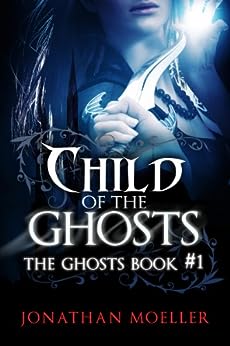 When her life is torn apart by murder and sorcery, the young lady, Caina Amalas, joins a mysterious group of legendary spies, and assassins of the Emperor of Nighmar, with whom she learns the secrets of diversion and infiltration.

However, not even that may be enough to make her safe.

For the evil that has destroyed her family seeks to devour the entire world.

Jonathan Moeller has a Viking-like figure that doesn’t match the usual computer repairman character. So much for stereotypes.

He is the author of the DEMONSOULED series of sword-and-sorcery novels, the TOWER OF ENDLESS WORLDS, an urban fantasy series, THE GHOSTS series, and the COMPUTER BEGINNER’S GUIDE sequence of information technology books, among numerous other works.

Visit his technology blog at http://www.jonathanmoeller.com/screed.

Child of the Ghosts by Jonathan Moeller is very entertaining and has a very well constructed plot with enjoyable characters.

The heroine is young Caina who lives in a world surrounded by sorcery and nobility. Her mother was denied a formal sorcery training and joined a different clan that deals with dark sorcery, and necromancy.

She sells her daughter, Caina, to one of the most powerful necromancers.

After a close call with death, Caina succeeds to escape from Maglarion and joins a legendary society named The Ghosts, that act as spies and assassins for Emperor of Nighmar.

The Ghosts were summoned by her father before he perished in the hands of Maglarion. Caina trains on deceit, disguise, stealth, infiltration, and murder. She becomes a strong weapon for The Ghosts in their fight against sorcery.

Child of the Ghosts by Jonathan Moeller unfolds at a breakneck pace, and all the plots points and twist should come in the right moment, making it a great book to savor with delight.

I recommend this book to teenagers, mature kids, and adults.

Feel free to leave a comment about this Child of the Ghosts by Jonathan Moeller book review.