This King Lear book review tries to fit the classical structure of this play into the model that we’ve been using on Books Crier. Read on!

Shakespeare’s King Lear invites us with the magnitude, intensity, and sheer duration of the pain that it pictures. Its characters harden their hearts, engage in violence, or try to alleviate the affliction of others.

Lear himself rages until his rationality cracks. What, then, keeps drawing us back to King Lear? For all the force of its language, King Lear is almost equally compelling when translated, implying that it is the narrative, to a significant part, that draws us to the piece.

The story tells us about families striving between greed and cruelty, on one side, and help and comfort, on the other. Passions and sensations are incredibly magnified to large dimensions.

Furthermore, we see the elderly defined in all its weaknesses, pride, and, perhaps, wisdom. Perhaps, for this reason, this story is one of the most devastating and moving of all Shakespeare’s tragedies.

Baptised on April 26, 1564, William Shakespeare was an English poet, playwright, and actor, widely regarded as the greatest writer in the English language and the world’s pre-eminent dramatist.

He is often called England’s national poet, and the “Bard of Avon”, whose extant works have been translated into every major living language and are performed more often than those of any other playwright. Shakespeare dies on April 23, 1616. 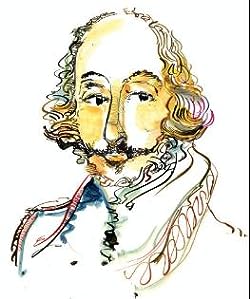 The official edition of King Lear from The Folger Shakespeare Library, the trustworthy and widely adopted Shakespeare series for scholars and general readers, comprises:

Keep in mind that the main plot has the complete set of characters while the sub-plot, due to its supporting function, is a simpler one. For these reasons, the sub-plot is more centered on the conflict between its sub-protagonist and sub-antagonist

Lear is the central character of the main plot, the title figure, and the guy who sets the action of the story. It is his retirement that fires all of the central chaos.

Most of the other roles align themselves either

who are clearly immoral and treacherous

In my opinion, Edmund is the protagonist of the sub-plot since it is he that pushes it forward when he decides to pull the carpet from under Gloucester and Edgar's feet.

We do not see the story through his eyes. We do not agree with his actions.

The central philosophical conflict in the story is

and how strong bad can become and mess up everything for everyone, even bringing madness or blindness to people.

Sidekick = Kent and Gloucester (to Lear);

King Lear's structure follows a classic five-part*  paradigm inherited from old Aristotelean times. We will try to fit the story into our dramatic structure model used in this website.

The play has a sub-plot that runs parallel to, and interacts with the main plot but is presented with a little time mismatch of convenience so we can establish the link between them. The analysis will be done step-by-step with those plots "side-by-side".

Let's see what we can come up with.

The first part is the Exposition, or Presentation phase, the segment of the play which introduces the Ordinary World and important characters.

It is Archaic Britain, just before Christianity.

King Lear is getting old, has three daughters, and no male heir.

This part presents the conflicts and actions that become a major trouble for the protagonist to solve.

It's is curious to mention that, in my opinion, in this story, it is not the Antagonist that sets off the trigger, but, in fact, King Lear, the Protagonist, himself

The segment establishes the main areas of conflict which will drive the story forward.

Without a Prince to succeed him, King Lear decides to split the kingdom among his daughters to avoid any conflicts after his death.

The trigger places struggles between:

This act usually is a longer segment that presents the rising action phase where a series of tests and complications build up to:

(A sequence of plot sections)

Here we witness the increasing action as the first conflicts develop.

At the same time, this part marks the beginning of a conspiracy orchestrated by Edmund, Goneril, and Regan, now associated villains of the stories.

O moment of crisis, or near=deth for the Protagonist usually happens at this point

King Lear’s central section is the peak sequence, where the action reaches a turning point and when the major crisis occurs.

The height of this play could hardly make a bigger dramatic effect. It centers on a violent storm for Lear. An enormous physical impact represents a turmoil that rages his mind into madness.

The Gloucester subplot also reaches its peak when cruel Cornwall and Regan make The Earl blind in a torture session.

Mid-point is a position in the story that brings enlightenment to the crisis and gives the protagonist new energy to continue his journey.

The recovery sequence begins as King Lear moves towards its resolution.

The King also begins to recover his sanity. Amongst the elements which suggest that the story may be moving towards a good-triumphing-over-evil happy ending are the deaths of Cornwall and Oswald.

Ultimately, however, these signs of a more just world only serve to heighten the catastrophe that unfolds as we move into this section.

The play concludes with a resolution to the various conflicts but not in any way which suggests a simple moral resolution.

The ‘evil’ characters (Goneril, Regan, Edmund) all die but so do Lear and Cordelia establishing the tragic aspect of the story

The play ends with Edgar as he is the one chosen to restore peace to the kingdom.