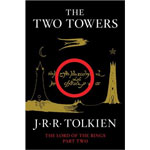 book is the exciting second volume in J.R.R. Tolkien’s epic adventure The Lord of the Rings. Read on! 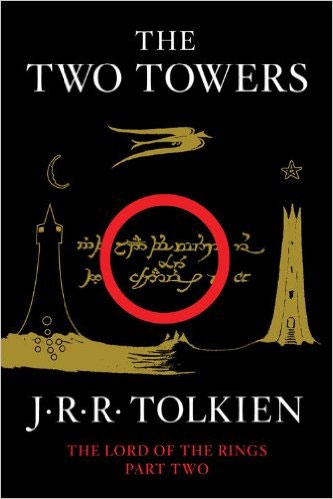 Danger has beset Frodo and his Companions of the Ring during their quest to destroy the Ruling Ring and avoid the Dark Lord getting his hands on it.

Gandalf is gone, lost the Mines of Moria battle. Moreover. Boromir tried to seize it by force, seduced by the power of the Ring.

While Frodo and Sam escaped, Orcs attacked the rest of the company. Alone, they continue their quest down the great River Anduin, mysteriously followed by the creeping figure tied to their tails.

The book is among the most exceptional works of creative fiction of the twentieth century. The work presents us with the richest abundance of new creatures and lands, the fulfills our imaginations with surroundings never imagined before.

J.R.R. Tolkien is a widely admired English writer as the creator of The Hobbit and The Lord of the Rings. (read mini-bio) 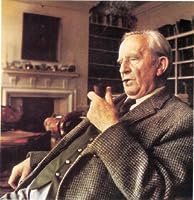 When last we left off the Company in The Fellowship of the Ring, Frodo, at last, decided to go to Mordor on his own.

Frodo's faithful friend, Sam, refuses to let him go alone. The two hobbits move along together.

Aragorn learns that the orcs have taken Merry and Pippin. Legolas, Gimli, and Aragorn decide to rescue the two from the orcs.

Aragorn bumps into a band of Riders of Rohan. He learns that Boromir and Gandalf have died. Saruman is building power in Rohan. Aragorn and his supporters keep track of the hobbits.

Meanwhile, a bunch of orcs keeps dragging Merry and Pippin around ending up the outskirts of the Forest of Fangorn. They engage in battle with the Riders. The orcs die, and the two hobbits flee into the forest.

They run into Treebeard, who thinks it's time to step in.

As Aragorn follows their trail and Gandalf appears miraculously. He's shining and white.

Gandalf tells his old buddies that the Ents of Fangorn have rescued Merry and Pippin.

The wizard instructs them to ride to Edoras to see a bloke named Théoden.

After solving local insurgency problems, it's time for Théoden to fight off Saruman's advancing horde.

Gandalf leaves the Rohan folks,  with plans to meeting them. As Aragorn and his troops arrive at Helm's Deep, the battle succeeds.

When they arrive in Isengard, Merry and Pippin announce that Saruman is trapped inside the tower with Gríma Wormtongue.

Treebeard is in charge of Isengard now. Apparently, the Ents pulled down the gates and flooded the land.

They must go to Gondor to defend it against Sauron. Gandalf takes Pippin to Minas Tirith. Théoden, Aragorn, and the Riders of Rohan will follow soon after.

On their journey, Frodo and Sam confront Gollum and make him help on the way to Mordor. Sam notices that Frodo seems affected by the Ring. He's also suspicious of the ambiguous Gollum.

Finally there, when Frodo works up his courage to approach, Gollum tempts him to go another way; In Ithilien, they run into some human scouts, and Gollum disappears.

Frodo tells his story to Captain Faramir, who makes uncomfortable guesses about Frodo's mission, but promises to help.

Gollum reappears, and Frodo asks the skeptical Faramir to have mercy on Gollum.

Against Faramir's warnings, Frodo, Sam, and Gollum leave in the direction of Cirith Ungol.

Sam suspects Gollum, who, confirming his suspicions, turns to his evil side and leads them into a trap; a hungry giant spider named Shelob.

Frodo tries to resist the beast. Sam is fighting Gollum and can't help him. Shelob overcomes Frodo. Sam kills Shelob, but Frodo appears to be dead. Sam resolves to go on as best as he can.

He picks up the Ring and lays Frodo as though for burial and starts leaving, but realizes something horrible: Frodo was just paralyzed.

He sees the Orcs take Frodo to their tower as a prisoner. Even alone, Sam but decides to save Frodo, no matter what.